Independent Curator Victoria Lynn has been appointed the new Director of the Tarrawarra Museum of Art after being approached by the board (chaired by billionaire retailer Marc Besen) in May.  A previous Commissioner for the Australian Pavilion at the Venice Biennale, Lynn also curated Turbulence, the 3rd Auckland Triennial in 2007.

Lynn will take over from current Director Maudie Palmer once she has fulfilled her contract as Visual Arts Curator of the 2012 Adelaide Biennial.

Following months of speculation, Sydney commercial space Grant Pirrie has officially announced its closure.  In a joint statement released on Friday, owners Stephen Grant and Bridget Pirrie said: “Today we have decided to finish the gallery, but Grantpirrie will live on.”  How?  The couple has hinted that the gallery’s project-based initiatives may continue offshore, with a focus on building international audiences.  Cold comfort for the gallery artists now forced to look elsewhere for representation in Sydney…

The gallery’s last day of business is October 15th.

Grant Pirrie to close its doors

White Cube is about to open the largest commercial gallery in England in Bermondsey, South London.  Along with three separate gallery segments and three smaller project spaces for non-represented artists, the 5,400 square metre warehouse conversion will also include a 60 seat auditorium, an archive room and a bookshop.  There’s even talk of establishing a dedicated education program.  Describing the enterprise, White Cube’s Director of Exhibitions Tim Marlow stated; “I hope it blurs the distinction between public and private galleries, though we always work in sympathy with and in dialogue with the public sector.”  While the new space is ostensibly pleb-friendly, the conversion also includes a series of private viewing rooms for serious collectors.

White Cube blurs the line between public and private 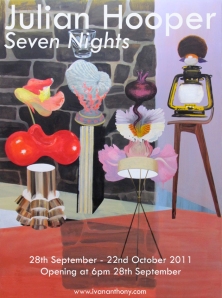 Long before Jackson Pollock revolutionised painting with his signature ‘all-over’ drips, he was a student at the Manual Arts High School in Los Angeles, and it was here that he created the little beauties above.  The unsigned book ends are purportedly love tokens that Pollock fashioned for fellow student Alice Crosby, who recently verified their authenticity. The mulberry streaked slabs are about to go up for auction at Cowan’s in Cincinnati, with an asking price of up to US$15,000.